Fallen trooper's Lacey mom saves others from what killed her son 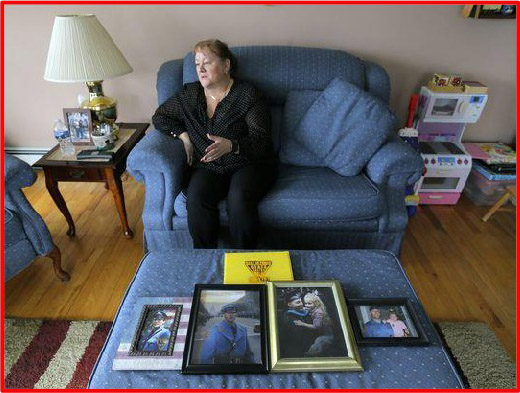 LACEY - The man who drove the car that killed her son sat right there, in one of the blue-gray upholstered armchairs that turn away from placid Lake Barnegat. Donna Setaro points to the chair, her nails neatly manicured in a shade of sienna. That man, Robert R. Swan, was here to apologize in her cozy, waterfront home about seven years ago, she said, months after his Volkswagen Jetta hit and fatally injured her son, Marc Castellano, who was standing on the shoulder of a stretch of westbound Interstate 195 that extends through Howell. It's been nearly eight years since Castellano, a trooper for nearly six years with the New Jersey State Police, died at Jersey Shore University Medical Center in Neptune on June 6, 2010, the same day of the crash. He was 29. Husband to Stephanie Castellano, dad to Julianna and Vincent. Julianna turned 12 just a few days ago, Setaro said, and Vincent is 9. “While traveling westbound on 195," Setaro said of Swan, who at the time of the crash was a 20-year-old West Point cadet, "he simply took his eyes off the road for a second and hit Marc." Swan, who was ticketed but not criminally charged in Castellano's death, has since graduated from West Point. He could not be reached for this story. It's also been around eight years since Setaro's world changed June 6, 2010, a day that beckons a storm of negative adjectives: horrible, terrible, nightmarish. Setaro calls it the worst day of her life. But that June day would eventually become the catalyst for a turning point: She would commit herself to activism, with her beloved son's memories at the heart of it. She would not let another mother — another wife, another family — suffer the pain she did. And so Setaro, 63 and a retiree, became an advocate, talking to people — mostly teens, but also adults — about the Move Over Law, which requires motorists, when able, to shift lanes for service vehicles that include police cars, firetrucks, first aid rigs, tow trucks and, most recently, sanitation trucks. She's trying to get a law passed in Trenton that would give drivers points for Move Over violations. Setaro calls her activism — and the sharing of the worst day of her life — the "Move Over AwaReness Campaign," or MARC. She wants members of her audience to not only listen — really listen — to her presentation, but to act on it, by following the Move Over Law. This she can do, she says, to honor her son. His eyes When Swan walked through her door to apologize about seven years ago, Setaro said he was nervous and dressed in a charcoal gray suit. But the first thing she noticed were his eyes — big and blue, like Marc's. "I challenged him to finish the job he set out, because if he didn't, I felt Marc would die in vain," Setaro said. "I felt in my heart that he had the same kind of personality as my son. He so wanted to — at an early age, at 21 — he wanted to serve our country. A third-year West Point cadet at 21 is certainly a young man, and knows what he wants to do." Donna Setaro, the mother of New Jersey State Police Trooper Marc K. Castellano, who was killed in the line of duty on June 6, 2010 after a car hit him on the side of I-195 in Howell, displays a photograh of her son holding his daighter, Julianna, who is now 12-years-old, as she talks about her Move Over Awareness Campaign program, where she makes presentations to students around the state about the NJ Move Over Law, at her home in Forked River, NJ Monday, March 12, 2018. (Photo: Tanya Breen) Setaro, sitting alone on a couch in her living room, wasn't angry when Swan visited her that day, she said. The crash that killed Marc was an accident, she says. But Setaro has her grief. She carries it openly yet tenderly, presenting to thousands of people all over New Jersey, as well as at certain business events in Maryland and Texas. On March 9, at Howell High School, Setaro reached a personal goal with her campaign: speaking to 100,000 people during 870 presentations. Howell holds significance, Setaro said. For one, it's where the crash happened. But it's also where Stephanie graduated from high school, and where Marc and Stephanie bought their house shortly after he proposed, Setaro said. Donna Setaro, mother of the late NJ State Police Trooper Marc K. Castellano, speaks at Howelll H.S. to bring awareness of the Move Over Law. Friday, March 9th, 2018, in Howell, New Jersey. Contributor: EvaJo Alvarez Walking through her home, Setaro points out dozens of items memorializing Marc: a framed American flag neatly folded into a tight triangle; a shadow box and a real rose entirely dipped in gold. 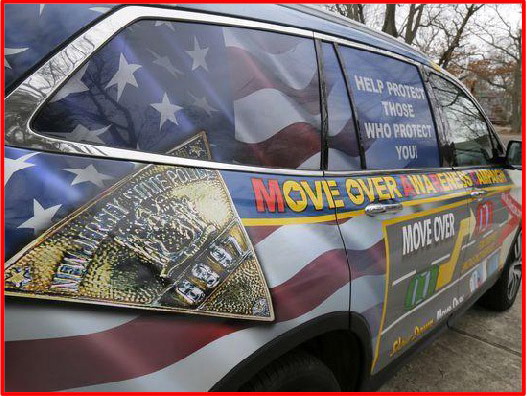 Donna Setaro, the mother of New Jersey State Police Trooper Marc K. Castellano, who was killed in the line of duty on June 6, 2010 after a car hit him on the side of I-195 in Howell, talks about her son and her Move Over Awareness Campaign program, where she makes presentations to students around the state about the NJ Move Over Law, at her home in Forked River, NJ Monday, March 12, 2018. Her car is wrapped to help spread awareness about her campaign. (Photo: Tanya Breen)

Setaro said she isn't paid to present. She works with the New Jersey State Police and uses her own money to pay for expenses. She drives to presentations a sport-utility vehicle colorfully wrapped in pictures and text that says things like "MOVE OVER." It was this vehicle, so garishly bright it was near impossible to miss, that was parked at Howell High School on a chilly, overcast Friday, an hour before noon. New Jersey State Police troopers and Howell police milled about in the school's auditorium and in the lobby outside it. Setaro was near the stage, quietly twiddling with a dark-colored garment bag. Setaro's demeanor exudes warmth. Her eyes — not blue like Marc's, but hazel — are wide and attentive. She effortlessly quiets the high school audience, chatty at first, with a practiced shhh, and has a confident back-and-forth with students that reminds onlookers of her background as a substitute teacher with Lacey public schools. The presentation begins as a public-service announcement: Motorists should switch lanes, or distance their vehicles from the shoulder when service vehicles are there. There's a bit of an added shock factor: Setaro shows four short videos, each of which elicit gasps from the audience when a car hurtles off the main road and slams into the police officer standing on the shoulder. Setaro says each of those videos, two of which were recorded in Minnesota and Ohio, are real footage. Alarming — yes, Setaro agrees with the audience. But the same thing happened just a few miles from Howell High School, she said, and starts to tell Marc's story, as it began June 6, 2010. Three troopers, including Marc, were requested to help back up Howell police, Setaro said, without telling the audience one of those troopers was her son. 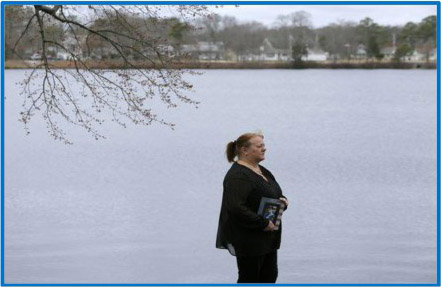 Donna Setaro, the mother of New Jersey State Police Trooper Marc K. Castellano, who was killed in the line of duty on June 6, 2010 after a car hit him on the side of I-195 in Howell, holds a photograph of her son as she talks about her Move Over Awareness Campaign program, where she makes presentations to students around the state about the NJ Move Over Law, at her home in Forked River, NJ Monday, March 12, 2018. (Photo: Tanya Breen)